Why You Should Choose Argentium®: An Interview with Cynthia Eid

Award-winning jeweler Cynthia Eid demystifies Argentium and explains what a jeweler can expect when working with this alloy.

Cynthia Eid isn't sure why some people are afraid of using Argentium® Silver. As a successful artist and instructor who's used Argentium since 2004, she receives emails from both people nervous about using it, and people thanking her for encouraging them to use it anyway. "Whatever you do, don't be afraid of it!" she says.

Cynthia frequently teaches classes and workshops to show metalsmiths and jewelers how they can utilize Argentium®. The material is a form of sterling silver, and both traditional sterling and Argentium are alloys, meaning that they're combinations of silver and copper. The copper is added to provide the structural strength not present in fine silver, which is often too soft to be practical for making jewelry.

Traditional sterling is infamously vulnerable to both tarnish and firescale, but the small amount of germanium added to Argentium® helps to inhibit oxidization. This greatly minimizes tarnish and all but eliminates firescale, but what can a jeweler or metalsmith expect from working with Argentium?

We asked Cynthia to tell us what it is about Argentium® that's getting it so many converts.

RG: What should I expect when using Argentium® for the first time?

CE: If someone is accustomed to working with gold, it will be similar. You can heat Argentium® the same way you would gold. The fact that it moves heat differently makes it easier in some ways to work on a large piece of hollowware, such as a vase. With traditional sterling, I would have two big torches in one hand, one torch in the other, but with Argentium, the heat doesn't dissipate as much, so you don't need as big a torch.

You only need to flux the joints. We want to allow oxygen to reach the surface so that it can combine with the germanium to form germanium oxide. This oxide prevents both firescale and tarnish.

RG: What are some advantages of Argentium® over more traditional sterling silver?

CE: Lack of firescale. With traditional sterling, you can prevent it or remove it, but not having to do either is a huge plus and saves a lot of time, effort, and materials that will offset the additional cost of Argentium®. For beginners, not having to even learn about firescale is a great thing to be able to skip, too.

RG: What can someone do with Argentium® that might be more difficult with other materials?

CE: Granulation didn't appeal to me until I tried it with Argentium® because it seemed so fussy and difficult to do with fine silver and too expensive to do with gold. But Argentium works beautifully—at least as well as, if not more easily than, high-karat gold.

RG: What makes it so much better for granulation?

CE: One difference is that a pure metal has a single melting temperature, so when you're fusing with fine silver, you're carefully trying to get it to that temperature, and then you have to make sure it doesn't go past that temperature, where the whole thing melts. An alloy, being a mix of pure metals, always has a range of melting temperatures. That range could be short or long, and the range for Argentium® is quite large (around 100 degrees), so the metal is very forgiving and much easier to fuse successfully without overheating.

You can also harden it easily in an oven or a kiln, which is nice for durability. At current prices, if you make something out of a thin metal, you can also make it stronger by hardening it. That can be done with traditional sterling but, in my opinion, the procedure is simpler and more effective with Argentium®.

RG: What about disadvantages? Anything that might keep me from using Argentium®?

CE: People who have been using traditional sterling for a long time may have become adept with the torch and comfortable with pressing something to fit as they're soldering. Argentium® is fragile when red-hot, so it can break if you press to fit. That's not been a problem for me because I try to fit before the heating so I can focus on one thing at a time, but others who do that routinely might not want to change working methods.

And, because Argentium® doesn't dissipate and spread the heat throughout the metal as quickly as traditional sterling silver, annealing is very quick. I, like many people, initially overheated Argentium when I annealed, because it happens faster than I was accustomed to. If you overheat sterling, it becomes brittle and fragile. Remember that it's better to underheat than overheat. If you underheat, you can always go back, but if you overheat, you've damaged the silver. That's true with all metals, in fact.

RG: You've been at this for a while. Any special tips for those who want to give it a try?

When you're ready to anneal, you can use a Sharpie to check if the temperature is right. Draw with the Sharpie on the Argentium® before heating it. Heat it until there's just a ghost of the Sharpie drawing on there, where you can see where it was, but the black is gone. Then the metal has been annealed.

Some people have gotten nervous because they've heard scary stories, but I've received emails from people who have thanked me for encouraging them to use it. Whatever you do, don't be afraid of it! Just read the directions and everything is fine. Since it's a different alloy, you have to recognize that and learn the differences in order to take advantage of them, just as you expect that gold and platinum have some working properties that differ from sterling. Remember that the heat stays where you pointed the torch, and that it's fragile when it's red-hot, and you'll be okay.

To learn more about Cynthia and the pieces featured here, check out her website: http://cynthiaeid.com/

How to Harden Argentium Silver 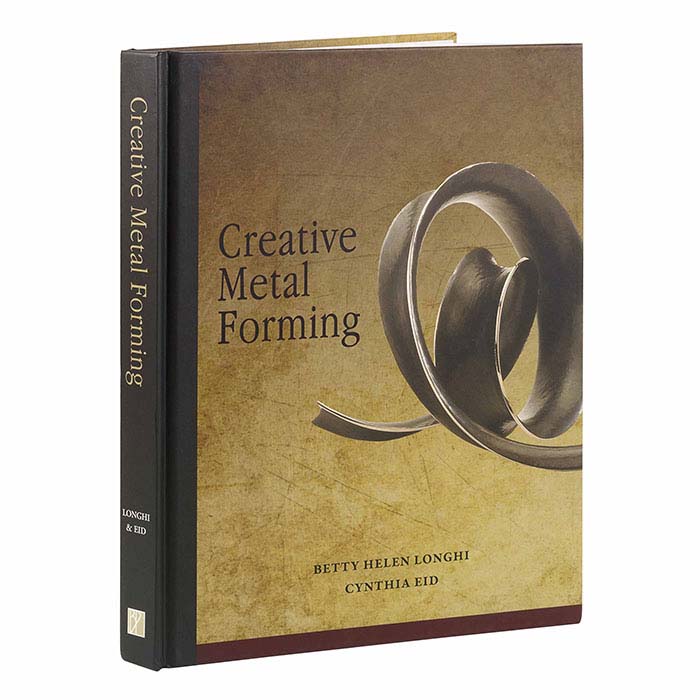