The multi-faceted, master silversmith combines centuries-old technique with modern technology to create award-winning designs that push metal and the envelope.

Not many of us receive a Christmas gift at 5-years-old that directly impacts the trajectory of our lives. But for Victoria Lansford, that's exactly what happened. "It was called Voice of the Mummy," she laughs. "It was this weird board game from Milton Bradley […] and you moved your Egyptologist around the step pyramid, and you picked up jewels. It was the first exposure I'd had to any kind of ancient Egyptian art and I was so mesmerized," she recalls.

In particular, it was the mummy mask of the Egyptian pharaoh, Tutankhamun, that really stuck with young Victoria. The mask of the boy king, a work of repoussé, would serve as the foundation for a lifelong fascination with this specific technique, a French term meaning to "push out." Today, Victoria is renowned not only for her works of Eastern repoussé—combining centuries-old technique with the latest technology—but for her mastery of a seemingly endless list of art forms and mediums.

Born in North Georgia and raised near Chattanooga, Tennessee, Victoria didn't have to look far after high school to begin her creative journey. "I actually picked Georgia State University because it had a full metals program," she says. As luck would have it, an artist-in-residence from the Republic of Georgia (formerly the USSR) named Gia Gogishvili would become her source of knowledge for techniques that had intrigued her since she first came upon repoussé as a child.

"All these things that I had wanted to know how to do, he seemed to know," she says. At a time when there were no books, no videos and no internet, Gia's experience and know-how was invaluable to Victoria, who had learned certain repoussé techniques, but still could not quite figure out "how to do what was in my head and in my heart," she says. With Gia's instruction, Victoria was finally coming to understand how the Egyptian art and the richly detailed pieces from antiquity that had so inspired her had come to be created. And so, the artist was set on her path.

Tools of The Trade

Within a few years after graduating from GSU, Victoria found herself in a position many budding jewelers find themselves in—that of teacher. While excited at the newfound freedom to make whatever she wanted, Victoria missed the camaraderie and immersive atmosphere of class. After teaching a few classes at Spruill Center for the Arts in Atlanta, Victoria was asked to create a department and put together an entire jewelry program.

Eastern repoussé was "one of the things people really wanted to learn, and I really wanted to teach it, but nobody liked the days and days that we had to spend making the tools," she explains. What was commercially available at the time wasn't garnering the results Victoria and her students were trying to achieve without hours first spent retuning tools at the grinder and polisher. The solution? Victoria decided she would make her own tools, designed expressly for Eastern repoussé.

After much trial and error experimenting with different methods and mills to develop the quality tools Victoria had in mind, a chance encounter at a SNAG conference would prove fortuitous. Having overheard Victoria lamenting the process to create her line of tools, Bill Fretz of Fretz Tools offered to cut them for her.

Today, every single tool sold by Victoria passes through her hands. With help from her son who carefully unpackages each tool delivered from Fretz, Victoria gives "every one of them at least a little bit of love," ensuring they are ready to go out-of-the-box for her customers and students. "A lot of hands touch those things, which is pretty awesome to me," she says.

While Victoria is no longer with the Spruill Center for the Arts, her career as an educator continues with a plethora of virtual workshops on Eastern repoussé, Russian filigree, granulation and more, available to students around the globe. "I love seeing people have that lightbulb moment," she says, adding "and doing it online, I get to watch a whole room full of people do that in one view, right in my studio."

"I have a lot of favorite techniques, but if you really pin me down, it's repoussé. Because there's just so much you can do with it," says Victoria. "It's like you're your own dapping block for any shape, any style you can ever think of.

So, what exactly is repoussé? In metalsmithing, the term "repoussé" means to strike sheet metal freehand from the back with punches to create bas relief, while the term "chasing" means to strike from the front to countersink, refine repoussé or create incised decoration. Victoria specializes in Eastern repoussé, a specific technical process rather than a design style. Typically done on sterling, copper or 18K gold, this process involves working alternately from the front and back, usually within a matrix of sheet metal. "What makes it Eastern repoussé is truly the process, the shapes of the tools and the way that they're used," explains Victoria.

But while she has created works of Eastern repoussé bigger than herself—thinking specifically of the custom double-doors she created for a bespoke, 69-meter super yacht—she typically likes to work small. "I tend to look at nonmetal things to get inspiration," explains Victoria, crafting intricate pieces inspired by the lines seen in art nouveau and art deco posters and architecture.

Also a calligrapher, illuminator and miniature painter (what can't she do?), Victoria is attracted to both Medieval and Arts and Crafts era work, printmaking, illuminated manuscripts, and Arabic graffiti. "Even though I can't read Arabic, I'm really fascinated by the lines and shapes that come out in it," she says. Constantly observing and taking in these other artforms, Victoria draws, draws and redraws until she comes to a design that subtly incorporates these influences but makes them all her own.

One of her most recent projects was actually a book, "Giving Voice," combining a number of her talents and influences—metalsmithing, Medieval illumination, Egyptian art, digital animation and jazz. "It was the kitchen sink project," she laughs. While the hardback book features a large piece of mokume gane repoussé, an award-winning, animated Apple Book version is available as well. "For the cover, I took hundreds and hundreds of still photos of that Eastern repoussé in process, from flat sheet to completely finished, and then put it together in animation."

With nearly four decades of experience with repoussé under her belt, Victoria still finds ways to innovate and push this artform to new heights. "You can combine it with so many different things," she says, as evidenced by "Giving Voice." And while Victoria is quick to credit many of her peers as deeply influential on her career, she continues to return to the artists and works of antiquity that inspired her so many years ago that Christmas morning.

Explore more work by Victoria Lansford on her website > 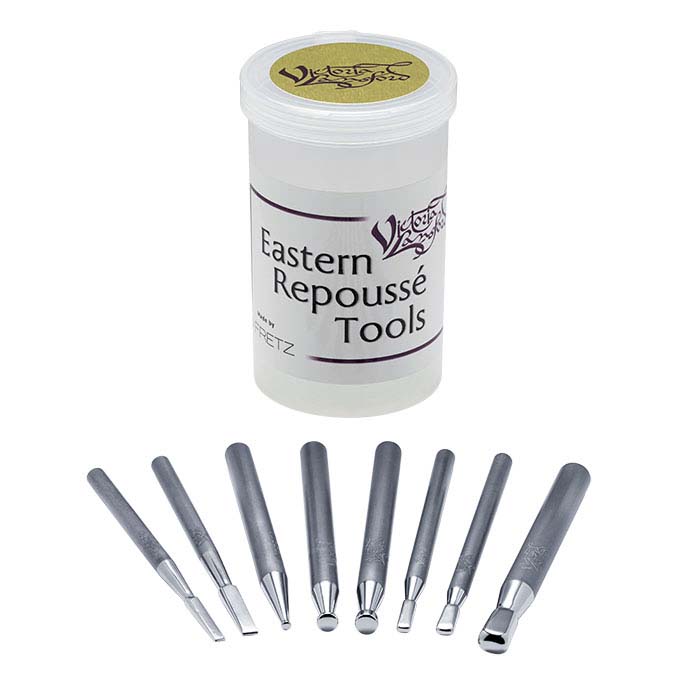 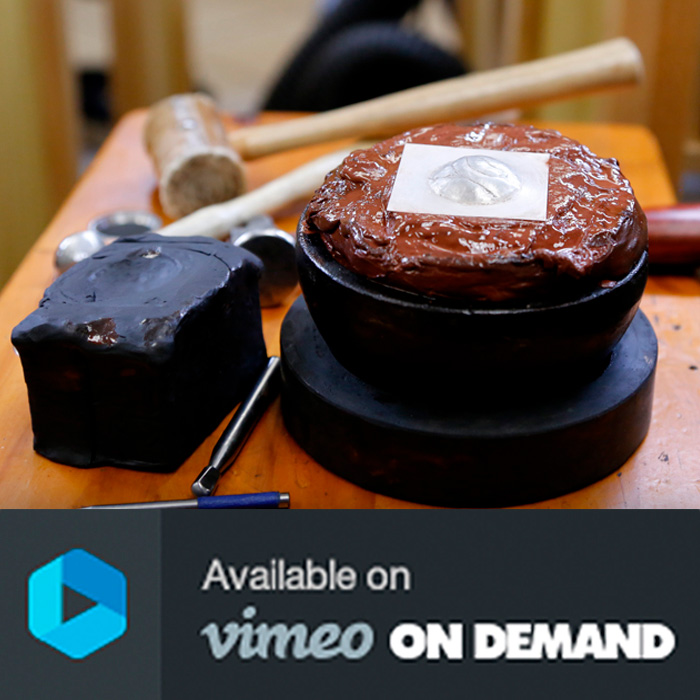 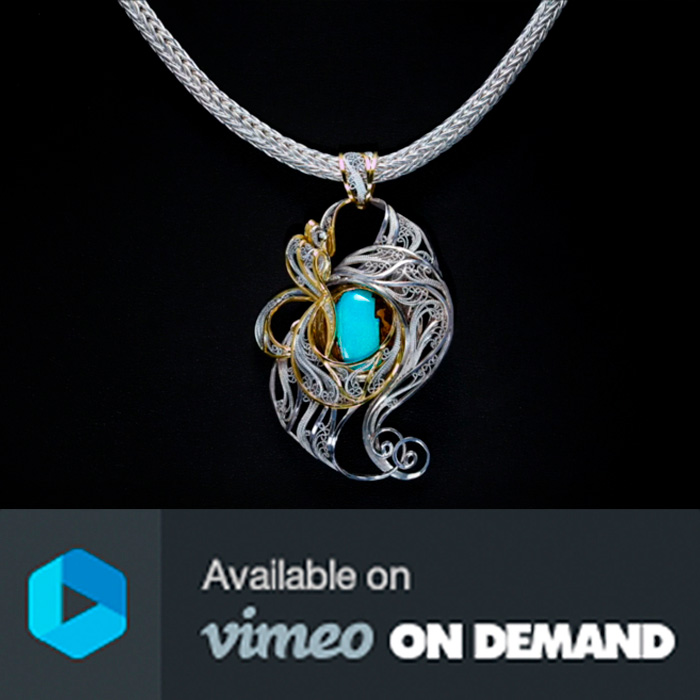 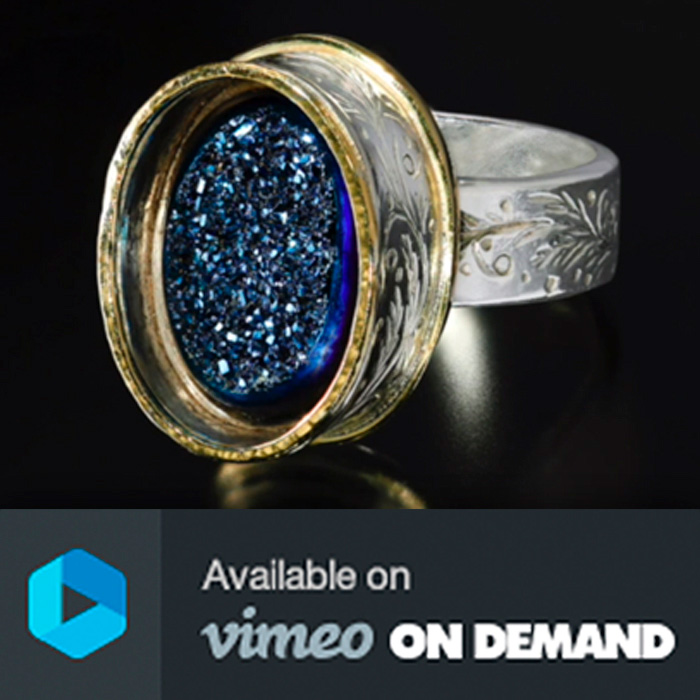